Another Christmas has yet again flown by. The lead up to Christmas is always so great, the preparations, gatherings with friends for pre-christmas fun, the cooking and baking, the sending of cards, purchasing and wrapping of gifts and so on.

This year Mat and I decided to bring our families together for Christmas, a great idea we thought and so did the families – although there was some nerves involved.

Firstly, we stayed in Stockholm at Hotel Rival (read more in the Stockholm Hotel guide). On Thursday me and Mat took the rest of the Horwood family on a great long walking tour of Stockholm and showed them our favourite parts of the beautiful city that Stockholm is. Chris mentioned that the buildings all look like paintings. We had lunch at Tysta Mari at Östermalms saluhall, fika at Vetekatten  and finished the evening off with dinner at one of our favourite restaurants, Kvarnen – a proper old fashioned ‘Söderhak’. I dare say that everyone had a great day, maybe a bit tiered after all the walking, but all in all a great day!

On Friday we travelled to Hudiksvall and then on to Nosebay or more correctly Näsviken and my parents place. Mat and I travelled early morning as we had a day full of meetings with the photographer and the venue – all very exciting stuff, we feel inspired now and rearing to go! Then we drove back into town and picked up the Horwood’s and then stopped off at Forsa Kyrka/Church to meet up with the priest who will marry us. We came in just in the midst of the choirs training – much to Mick’s delight, he was very impressed with them all! The priest was lovely, he’s just a normal and really nice fella, so relaxed and down to earth. None of that old fashioned stiff and stuffy way of being. He said he’s even on facebook!  After our little chat with him we walked back out to the church and the choir was just practising – to my delight – Oh Holy Night – perhaps my favourite Christmas song.

On Christmas Eve (the day the Swede’s celebrate Christmas) Mat, my dad and I with three ‘kicks’ and Diva the dog in tow went to pick up the Horwood’s for a Christmas walk – the weather gave us a treat with blue skies, sunshine and a perfect -7C.  We had great fun going on the kicksleds together and a beautiful walk, I won’t mention when Dagmar tried to kill herself and Mick by crashing in the ditch with the kicksled going down a steep hill or the fact that Mat and Chris did the same thing almost straight afterwards. It certainly made for great entertainment for Sarah and myself at the bottom of the hill. Luckily for Sarah, she chose to go down the hill with a kicksled pro (me). We continued back home to The Eriksson’s where we started preparing for the Christmas meal with Kalle Anka on the telly in the background (something only the Swede’s will understand). We sat down for our Christmas dinner and we ate and drank, drank and ate and then ate some more and so the evening continued.

Christmas day had a very early start for Mat, Jane and I as we decided to go to the Julotta in Forsa Kyrka at 7am in the morning. It was a really lovely service held by Andreas, the priest who will marry us. The choir sang for us – Mick was rather upset he didn’t manage to wake up to come with us, the church looked nice and cosy with all the Christmas candles lit.  After the service we went home for a morning nap and then we started our day again later on in the morning. Unfortunately Mother nature gave Christmas Day a rather bad ending, the walk back to the Horwood’s house was rather slippery and the walk back to the Eriksson’s house was not just slippery, but windy too and the wind only got stronger and stronger throughout the night.

Boxing Day we woke up to no electricity – we too had been struck by the storm which had been named… Dagmar. (Don’t worry we are not holding it against her ;-)) Dad was kind enough to make some coffee on his portable gas stove and drove off with it and some water for the Horwood house only to come back a minute later to start the chainsaw, turn it off and drive off again. A tree had fallen across the road and was blocking his path so he did what he normally does – gets on with it. Like Mat said: Your dad really has a tool for each occasion! I say; I’m lucky to have such a resourceful dad!

After some extra driving we got the Horwood’s off on their train to the airport and off they went. Mat and I had the same problems due to Dagmar causing the trains from my hometown not running or running with severe delays the following day, but we got back to London and here I am, writing an epic post about our Eriksson & Horwood Chrismas, I’m sure I’ve bored you to death by now, but I have to say that this years Christmas was, at least to me and I hope to the rest of the lot, a great success and one of my favourites in a very long time. There’s nothing I like better than to have lots of people around the Christmas table!

A MASSIVE thank you to everyone involved, but a very special one goes out to mum for all the work and preparations she put in to put us all up, make us all feel at home etc. – you’re amazing! And to Niclas, my brother for cooking the BEST food and just for being you! And lastly to my dad who drove us where we could not go by the means of the transport we should’ve – Thank you Eriksson’s, I love you!

I feel very lucky, for very many different reasons of course, but today I feel lucky that I have the right to marry the person I love. To me, I think that its the most natural thing that we all get to marry the one we love and adore more than anything on this earth. How could we not be allowed this wonderful gift of love?! Sadly this is not the case for everyone.

My friends Jesse, who is from the States and Max, who is from Argentina, are living in the UK in exile because of DOMA (Defence of Marriage Act). All they want to do is to get married and live together in the US – but they are not allowed to do this because of DOMA.

If you think, like me, that EVERYONE has the right to marry the person they love, then please sign up on http://getequal.org/gethome

I thought I should explain to the English, or non Swedish more like it, what the name of our blog actually means…

A lot of our friends already know that Mat calls me Little One – even in public, which sometimes can be a bit embarrassing, but its all done with love so it doesn’t really matter. So now you can figure out that Humlan is what I call Mat.

Humlan is Swedish for The Bumblebee – it might sound strange for me to call my loved one a bumblebee, but not for me. Ever since I was a little girl I’ve loved bumblebee’s, my mum can vouch for this. Whenever I would see a bumblebee that had dozed off on our veranda windows I would grab a sugar lump and poor some cordial over it, (something I learned from one of my favourite movies, Dunderklumpen) place it next to the dozey bumblebee and leave them to it. Later on I would check up on the bumblebee and they would be gone, having sucked up some sugar and regained their energy Another reason why I always have liked bumblebee’s, apart from being so cute and fluffy and disobeying natures gravity laws by being able to fly, is the buzzing noise they make when they fly. Those of you who know Mat well knows that he hums a lot, not melodies or songs, it’s more a buzzing long constant hummmmmmmmmmm, that sounds very much like a flying bumblebee. So there you go – thats why he’s Humlan.  And we thought it would be good to combine a Swedish and English in the name for our blog, so we thought Humlan & Little One was perfect.

Today is Swedish Lucia, it has been celebrated since before Christian times. Legend has it that the night leading up to the 13th of December was a dangerous one, filled with super natural creatures lurking around causing all sorts of trouble. It was also thought that the animals could speak during the Lucia night. All the preparations for Christmas were due to be finished for the Lucia day and this would be celebrated by eating and drinking.  According to the old Julian calendar the Lucia day would fall on the winter solstice, which is why we traditionally celebrating the light coming back into our lives on Lucia day. Todays tradition of Lucia Choirs – led by one lady with lights in her crown dates back to around 1900 in Sweden.

Lucia for me, marks the real beginning of Christmas, its not until I’ve seen a Lucia concert that I get that real cosy, warm Christmas feeling sparking up inside me. I remember waking up as a kid, those cold and very dark December mornings and longing to go to school as I would get to see who was Lucia for this particular year, the concert was followed by the traditional Lusse Katt aka Lucia buns (saffron buns) and the rest of the school day was fun filled with us making decorations etc.

There are Lucia concerts in London too, and its getting increasingly popular and spreading to other parts of the UK too. The Swedish Church do one big concert yearly, usually at St Paul’s but you will have to be on guard and get your tickets early – they usually sell out as early as September. So in the meantime, the below video will have to do. It’s best enjoyed with some Glögg and pepparkakor with blue cheese.

So today is the day when I usually do my yearly Christmas baking with my dear friend Anna – but I’m at home with a stinking cold. So instead of posting some real photos of our ‘baking crops’ these from last years work will have to do instead for now, until I regain my energy and bake my own Lucia buns and Swedish gingerbread cookies aka pepparkaka. 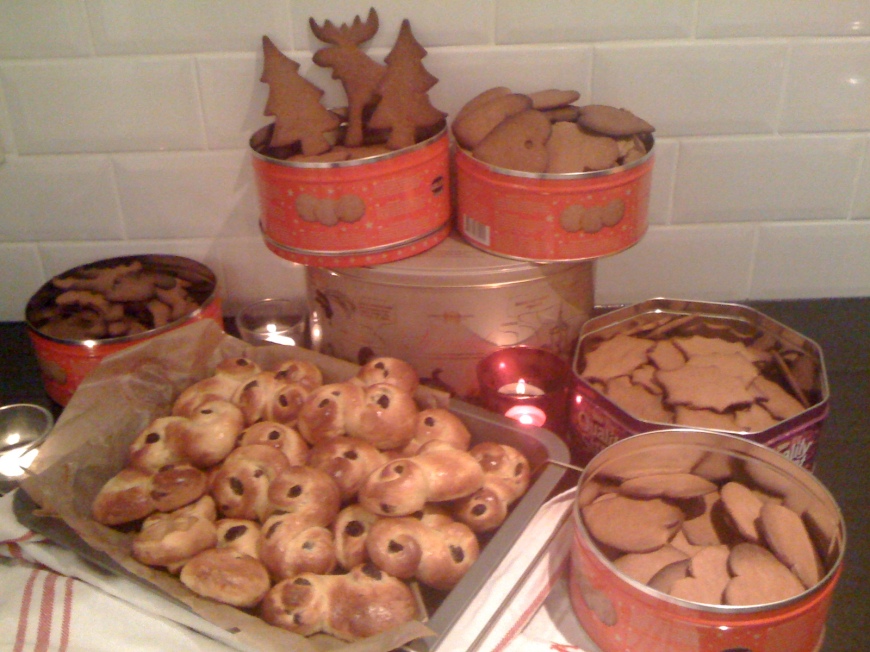 Christmas is creeping up on us very fast, it’s already the 2nd of Advent today, I have just lit the second candle in our Swedish ‘Adventsljusstake’.  The decorations have been put up and we got our christmas tree yesterday morning. It’s small but very cute! I have also been busy baking over the weekend.

This week we have finally decided on what we should do for our ‘save the date’. We have been scouring the Internet for inspiration and there is heaps to choose from and its been hard to make up our minds. But we feel we have found a great option now. So they will be sent out very soon!

To get you in the Christmas mood I’m sharing a classic & traditional Swedish Christmas print by the very much loved painter Carl Larsson.

Love to travel and explore. Love the great outdoors, love to bike and hike. Love all things coffee, drinking and making it and always in search for the best coffee spots. Love animals, all things pretty and rad.